Ann Boswell, (known as Granny Boswell) was a noted fortune teller and wise woman. Born in Ireland in 1813 to Romany lineage. Ann and her husband Ephraim (known as king of the gypsies) came to Helston during the 1860’s. Together they had six children. People from in and around the Helston area would often go to Ann seeking advice with young girls asking for their fortunes especially in matters relating to love and selling healing charms. Ann was also noted for her skill in healing sick cattle. After being placed in Helston Workhouse for drinking Ann died the age of 96 on the 16th April 1909 and was buried at the Tregerest Methodist Chapel. As shown in the pictures she had a large funeral procession that was attended by members of the Romany community from near and far. There are reports of people camped either side of the road. A photograph of Ann sitting with her hands placed in her lap was taken by Alfred Herbert Hawke around 1900 and shows that Ann was an important and much-loved part of Helston’s history as she is today.

Written by Chloe Edgcumbe as part of a work placement whilst on a MA course with the University of Exeter looking at Helston’s history. 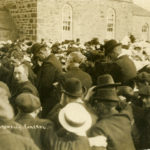 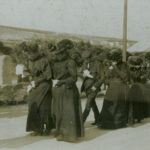